Brimstone and Treacle: Teaching History of Medicine with Recipes

One of my favorite assignments for introducing undergraduates to early modern medicine is a recipe transcription project. I ask students to transcribe and analyze recipes for medicines from an early modern English manuscript recipe book held by and digitized by the Wellcome Library in London.  You can find the catalog record, and link to the digital version of MS 8097 here.  According to the Wellcome catalog record, the manuscript is from the 17th and early 18th century.  It contains multiple hands, but none of the authors are known.  One section of the book contains recipes for food, and the other contains recipes for medicines.  I modeled the assignment after Lisa Smith’s “An Experiment in Teaching Recipe Transcription” and Amy Tigner’s “Teaching Recipes”.  I drew considerable inspiration from other blog posts on The Recipes Project.

I have two main goals with this assignment:

First, I want students to have some idea of the diseases people suffered from in the past, and how they coped.  While it’s easy for students to learn the simple diagram of the four humors, it’s much more challenging for them to get a sense of how the humoral system worked in practice.  The manuscript recipe book contains remedies for a wide range of diseases and conditions, some familiar and some quite foreign.

The assignment proceeds in stages, which I stagger over about three weeks, but which could be compressed into a shorter period.

I have students take portions of an on-line paleography course set up by Cambridge University: English Handwriting 1500-1700, working on this in class in small groups so they can help each other out.  Some students take more naturally to paleography, but all of them can get up to speed fairly quickly.  The manuscript I have selected is not very difficult to read, so I find that one class session with each group doing the on-line tutorial at the lowest level of difficulty is sufficient to equip them to transcribe some of the recipes on their own.  The on-line tutorial also familiarizes students with the conventions of transcription.

Just a side note: I had some trepidation before I tried this assignment the first time because most of my students are science majors taking my course to fulfill a humanities requirement.  Very few intend to become professional historians or historians of medicine.  I expected some students to balk at being asked to learn the highly specialized and technical skill of paleography, which, after all, has limited applicability if you are a biology major.  To my surprise and relief, students were generally enthusiastic and regarded the exercise as an interesting puzzle to work out, rather like a crossword.

Each student picks one page of the manuscript to transcribe, and every student must pick a different page.  I allot at least one class period for them to work on their transcription.  This gives them a chance to ask me – and their classmates – for help deciphering difficult passages.  Having each student choose a different page allows us to discuss the range of recipes in the book.

Once they have transcribed their recipes they begin investigating them more closely.  I ask the students to look up all the terms used in the recipe, including the ingredients, equipment and techniques needed to produce the medicines, as well as the diseases and conditions they are meant to treat.

Many terms are straightforward. Rosemary, nutmeg and sugar are common ingredients today.  Boiling, straining and roasting are still common activities in a modern kitchen.  Coughs, burns, toothaches and miscarriages still plague people in the twenty-first century.

But students also encounter large numbers of ingredients – like brimstone and treacle, cardus and scordium, turbith and senna – that most of them have never heard of.  Other ingredients – like snails and tobacco – are startling to see as medicinal substances.  (Many recipes in this manuscript call for snails.  For early modern uses of snails in treatments of consumption, see Snail Water? Did I read that right?)  Distilling and calcining are not commonly performed in kitchens anymore, and alembics and stills are no longer part of a household’s equipment. Finally, in this manuscript students confront a world of diseases and conditions that are profoundly different from their own: tetter, the whites, green sickness, wind of the mother, scorbuticall humours, stranguary, quotidian ague and bloody flux.

For terms that are not familiar, students use the Oxford English Dictionary.  If there is a named person in the recipe, I ask them to look that person up in the Dictionary of National Biography.  I also ask them to try to find other versions of their recipes in printed books using Early English Books Online.  This can help them identify the uses of some remedies which the author simply gives recipes for without stating their uses (like wormwood water and scotch pills).  It also gives insight into the circulation of recipes between manuscript and print.

Many students commented in their reflections on the sheer breadth of the author’s (or maybe more accurately authors’) knowledge about the chemical and medicinal properties of a huge range of natural substances, including plants, minerals, metals, and even animal parts, as well as the wide range of diseases and conditions she (or possibly he) felt confident treating.

Almost all of the recipes presume skill in cooking processes like boiling, straining, roasting, or preserving. Most women would have had these skills. Some of the recipes require both expensive and specialized equipment and presume skill in chemical operations. A recipe for “A Water for the palsey” says to “Take the tops of Lavender when it is flowred distill them as you doe rosmary” (my emphasis). Here the assumption is the reader does not require direction in how to do a distillation. Presumably this skill was taught in person rather than by reading a book. The same is true of the “cooking” skills. These were taught by showing someone in person, rather than asking them to read a book.

The recipes range from the very simple to very complex, with large numbers of ingredients and steps. The simplest recipe a student transcribed was barely even a recipe. This was a cure for “the bite of a Viper” that simply reads: “Hold a red hot Iron to the part bitten, and it will take away the venom, so that it will stick to the iron in a yellow spott.” By contrast, a recipe for “Imperial Pills” contains twenty five ingredients, most of them plants not native to England. These imported plants include zedoary and turbeth (from India), rhubarb (from Asia), nutmeg and mace (from the West Indies) and grains of paradise (from West Africa). 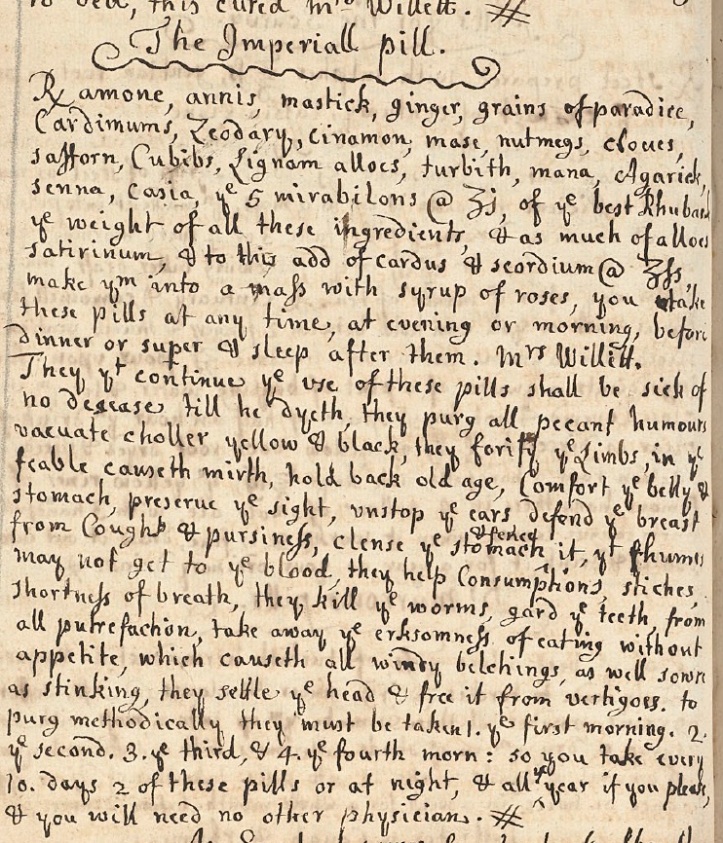 Several recipes indicate that the writer has tried the recipe on herself: “The Medisines I took of Dr. Browne when I had the pain in my side. June. 1687” and “The Medicines I toak for the Gripes of Madame Howard June the 14. 1695.” In other recipes she indicates that she knows or has heard of someone who took the medicine and was helped by it. In “A Syrup for a Consumption or Cold,” she states: “I have known it done much good.”   And in “for Outward piles,” “I heard of a gentleman once doing, it was cured.” One recipe notes that the writer experimented with variations of recipes. The recipe for “A rare Damask powder,” calls for “benjamine and storax” But at the end, we read, “instead of benjamine and storax, I put in some Calamus Aramaticus, it was very good.”  All of this indicates that these recipes were tried out, and adjusted if the desired results were not achieved. 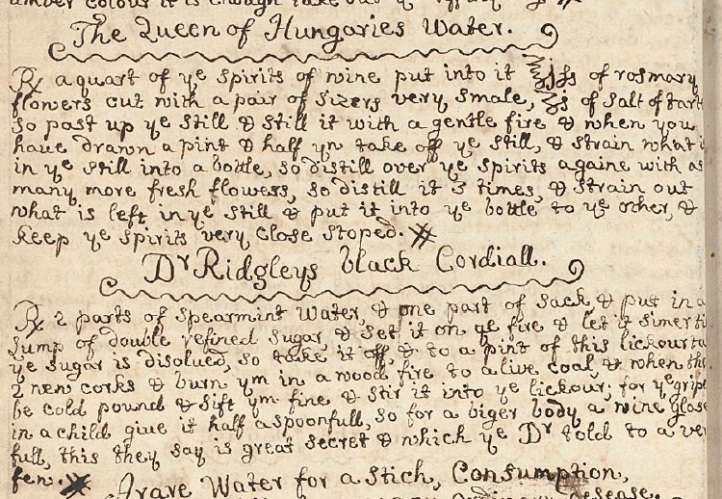 Some recipes contain references to named individuals, some of them doctors, but many of them other women. “A Diet drink for the kings: evill [scrofula]” contains an attribution to “Cos. Luttrell of ver.”  Other recipes refer to the Luttrells of Dunster. The Luttrells were an aristocratic family who lived in the village of Dunster, Somerset, England, from the fourteenth through the late twentieth century. “A Syrup for a Consumption or Cold” is also “called my Lord mount Alexander’s syrup.” This probably refers to Hugh Montgomery, first Earl of Mount Alexander, or the Viscount Montgomery (c. 1623 – 1663). “Dr. Ridgley’s black cordiall” may refer to a Dr. Ridgley (1576 – 1656) who was a member of the Royal College of Physicians and an advocate of the new “chemical medicine” that derived from Paracelsus. There is also “The Lady Allens Cordiall Water” and “The Queen of Hungaries Water.” Madame Howard, Mrs. Willet, Mrs. Staples, Cosen Wightwick, and many others appear throughout the book. This suggests an exchange of recipes and medical and chemical knowledge among a set of aristocratic practitioners, similar to exchanges that scholars such as Alisha Rankin and Elaine Leong have shown in their work. The water ascribed to the Queen of Hungary appears in several printed books of the period, suggesting that the author of this manuscript book may have read printed recipe books, tried recipes from them (perhaps modified them), and copied those she liked into her personal recipe book.

The author of this manuscript offers no explicit theorizing about the causes or nature of the different diseases, such as one would find in learned medical works of the period.  Many recipes are purges of one kind or another.  Some refer to removing specific humors (melancholy or choler), while others refer more generally to “purifying the blood” or “ill humors.”  The numerous references to humors might suggest adherence to traditional Hippocratic-Galenic medicine, but the author is eclectic in her selection of remedies and empirical in her approach to medical care.  The appeal of this manuscript and others like it (and hundreds of manuscript recipe books have been digitized and made available online in the past few years) is the glimpse it provides my students into the suffering and pain of the early modern period and the ways in which medical practitioners and patients coped.  This was, of course, a world in which people feared plague, smallpox, and tuberculosis.  My students are always surprised by how vigorous the early modern response to these killer diseases was.  They are apt to believe people in 1600 who contracted smallpox just lay down and waited to die.  To be presented with recipe after recipe offering to cure smallpox (or plague or consumption) challenges stereotypes of pre-modern medicine as largely superstitious and ineffectual.  The manuscript contains numerous recipes for more mundane problems: burns, wounds, toothaches, nosebleeds, constipation, deafness and weak stomachs.  A large number of recipes are for pregnant women (including multiple recipes to prevent miscarriage), women in labor (to help ease pain, speed delivery or expel the afterbirth), and nursing women (including numerous different salves for sore nipples). The health of children was clearly a concern.  Many recipes are specifically for children – remedies for coughs, worms, rickets, and “a child that is burst” – and others give specific dose recommendations for children.  In sum, the manuscript serves as a record of a general practitioner’s medical activities in the seventeenth and eighteenth centuries, and gives students a way into a medical world that is both familiar and strange.

All recipe images in this blog are from Wellcome MS 8097a.

Visit our Syllabus Archive for teaching the history of medicine!